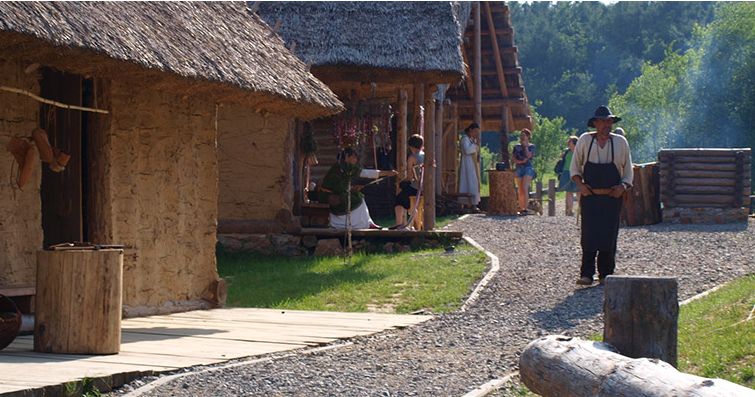 The Sacred Grove, the pagan gods called Świst and Poświst, an old inn, a herbalist’s hut, potter’s and carpenter’s workshops – you can see this in the Medieval Village in Huta Szklana in the Bieliny Commune.

The medieval village in Huta Szklana is a unique place in the Świętokrzyski region. When crossing the gate of this village, we are transferred to the past, into the reality of the 12th C. Here we can meet medieval inhabitants of the Świętokrzyskie Mountains who teach us how to knead clay or weave canvas to make coarse shirts.

The unknown Slavic mythology has been revived there, as well as the legends and stories from the area of Łysa Góra. This folk heritage has been adapted to the modern tourist requirements. The outside activities of “The Land of the Świętokrzyskie Legends” are an interesting proposition for active leisure, it is also a connection of fun and education. It has the form of a strategic game transferred into reality, while its plot is based on the local legends. On the tracks there are figures from ancient times of the Świętokrzyskie Mountains, taken from a variety of folk legends and stories, which were passed on from generation to generation by the local people.

The territory of the village is divided into three areas. The first, located on the slope, next to the way to the Holy Cross, is designed to be a place for socialising, recreation and gastronomy. The second is the “sacrum area” located higher than the rest of the complex, on the west and east bordered by a waterlogged tributary of the Hutka River – inside it there is the Sacred Grove, stone henges of ancient gods: Świst, Półświst and Pogoda, as well as, an amphitheatre and a herbalist’s hut. The third, elevated area, located next to a forest is a Slavic settlement with the buildings in a 9th-12th C. style. It contains a pottery, weaving, leatherwork, shoemaker’s and blacksmith’s workshops, as well as other interesting objects.